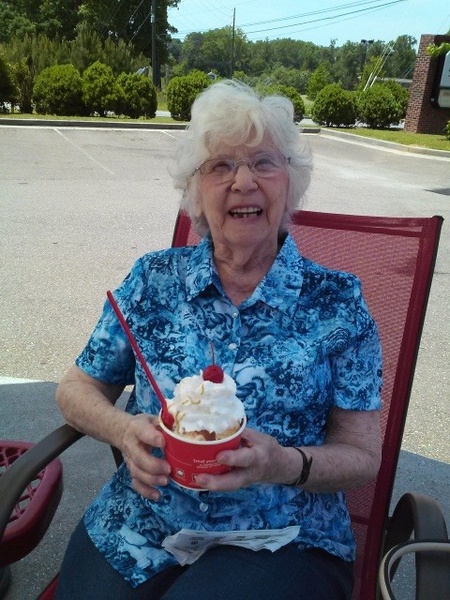 Margaret Annie Laurie Seifried of Macedonia, GA passed away on Thursday, November 22, 2018, with her family at her side.  Margaret, 96, was born in Halifax, Nova Scotia, and came to New York City as a child with her parents.

She attended Hunter College, expecting to train to be a nurse until she was told she was too short.  Afterwards, she and her new husband, Gordon James moved upstate and built a home in Holland Patent and began to raise their three children.

Under sad circumstances, they parted, and she raised her three children alone while working at the school cafeteria and going to night school for accounting and started work at Utica National Insurance Co. Inc. Margaret and her children attended South Trenton Presbyterian Church, where she was a Sunday School Superintendent.  For a year she was the tax collector for the Township.  In 1966 she married Lester Seifried of Barneveld, NY.

When her daughter and family moved to Georgia, Margaret, Lester and sons followed in 1975 so her job transferred her to their company in Atlanta, and they settled in Marietta.  After her children were grown, she donated enough money to raise three children in India from toddlers to high school graduation.  Her parents, Sadie and John Crowell moved down also, and they all joined Margaret’s beloved Bethel Baptist Church in Woodstock.  After Lester’s death in 1982, she joined the VFW, where she served as Chaplain for a length of time, also, organizing Christmas parties for children with Down Syndrome and other generous services.  Margaret retired in 1991 and continued caring for her father and mother until their deaths in 1990 and 1999, respectively.  In 2009, after such giving deeds as delivering for Meals on Wheel several years, she moved into her daughter’s home in Macedonia.  All of Margaret’s life, her home and heart had always been open.

Her passing was during her sleep, sweetly and peacefully to her reward in Heaven.  She leaves behind her daughter, Laurie Thornton (Ben), two sons, Merlin and Everett James of Marietta, two grandsons, Chase and Marlan, two granddaughters, Bridgette and Mikhail, one great granddaughter, Makylah and many cousins, nieces, nephews and friends.

Service for her will be at 1:00 pm Tuesday, November 27th at Canton Funeral Home at Macedonia Memorial Park.  Margaret will be laid to rest next to her husband, Lester at Mountain View Park Cemetery in Marietta, GA following the funeral service.

Canton Funeral Home is honored to be serving the family of Margaret Seifried.

To order memorial trees or send flowers to the family in memory of Margaret Seifried, please visit our flower store.