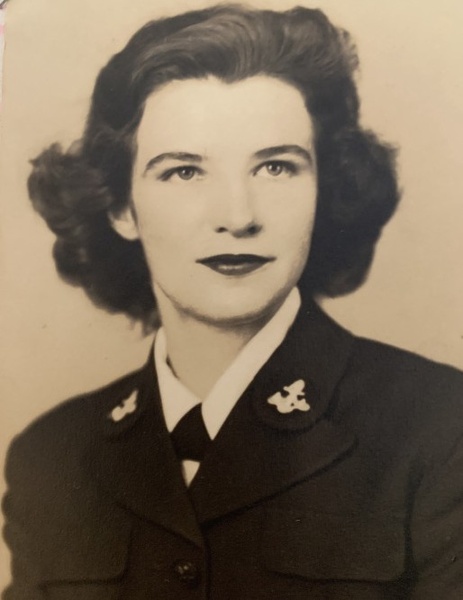 Peggy spent her formative years between Dunkirk and Versailles, KY. She graduated from Margaret Hall School in Versailles in 1939, then went on to earn a degree in Landscape Design from Ambler School of Horticulture at Temple University in PA. During WWII she served as a Navy WAVE stationed at NAS Atlantic City where, as a Link Trainer Instructor, she taught pilots how to fly by instruments.

After the war, Peggy moved to Williamsburg, VA, where she met The Rev. Stiles Bailey Lines, a young Episcopal priest who was serving as interim rector at historic Bruton Parish Church. They were married there in 1947. Their first parish was in Camden, SC, where Stiles served as rector of Grace Church, and where their three daughters were born. From there they moved to Delray Beach, FL, where Stiles was rector of St. Paul’s Church. After five years, Stiles was asked to join the faculty of the School of Theology at the University of the South in Sewanee. They moved their family to the Mountain in 1966 and remained there for the next 50 years.

Peggy was a charter member of the Emerald Hodgson Hospital Auxiliary and worked as a volunteer at The Hospitality Shop for 43 years. She was a longtime member of Otey Memorial Parish and particularly enjoyed volunteering at the Thurmond Library. She was an active member of the Episcopal Church Women and served in numerous capacities, including president.

Peggy’s interests were many. She was a talented artist, focusing on watercolors and pastel portraits of her family, and a gifted seamstress, creating everything from prom dresses to slipcovers. An avid Atlanta Braves fan, she often called her grandsons during games to ask a technical question or discuss a play. She especially loved to garden and spent many hours tending to her plants. At various times, her yard was resplendent with peonies and daylilies, but she always loved March best, when daffodils completely filled the woodlands behind her house.

Their rambling old home in Sewanee became a haven for their entire family, who visited often. Countless hours were spent on the screened porch or in the front yard where “Gammy” pitched baseballs to her grandchildren or challenged them to games of badminton or croquet. Known for her spunk and sense of humor, she was interesting to talk to because she was so interested in others. She stayed in touch with her friends and those of her children, and was quick to offer a meal or a bed whenever they were in Sewanee. In later years, friends and neighbors spent many pleasant hours chatting with her on her front porch; she particularly enjoyed it when the conversation turned to politics.

After leaving Sewanee, Peggy resided at Park Manor in Nashville and St. Anne’s Terrace in Atlanta.

A memorial service is being planned in Sewanee on June 2nd (COVID restrictions permitting). Her ashes will be interred alongside those of her husband in the University Cemetery.

To order memorial trees or send flowers to the family in memory of Margaret Lines, please visit our flower store.