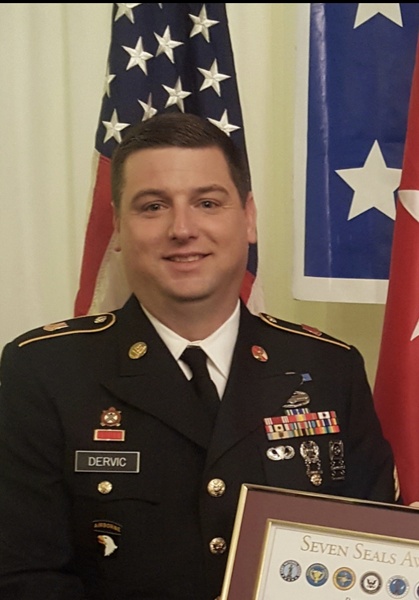 On March 27th, SGT Jonathan George Dervic passed away.
He is survived by his beloved wife Misty Dervic, his son Spencer Dervic, his furbaby Harley Dervic, his father Muhamed Dervic, mother Cindy Dervic, sister Jennifer Coffman and brother Mike Dervic.
Jon was a loving husband, father, son, brother, cousin and friend. He was originally from Twinsburg, OH, however lived in Canton, GA with his wife Misty and furbaby Harley for many years, Jon served in the US Army with two tours in the Operation Iraqi Freedom War as a highly decorated Army Airborne Ranger. He moved to the reserves and was still active under 1st Bridge, 94th Training Division. Jon had served 18 years and was planning on retiring at 20 years. He was a dedicated soldier and sacrificed much for his love of our country.
Jon was a graduate from Reinhardt University with a Bachelors of Arts  in Business. Jon was an avid Harley Davidson rider. He loved fast cars, fast bikes, big trucks and working on them all. He was truly a gifted and highly intelligent man who would give you the shirt off his back. Jon knew the importance of being kind to others and he was always helping a friend, neighbor, co-worker, fellow soldier or family member. Jon is loved by so many and will never be forgotten.

Jon will be inurned at the Georgia National Cemetery on Thursday April 7, 2022.  The family will receive friends on Monday April 4, 2022 from 11:00am until 2:00pm followed by a funeral service at 2:00pm. Pastor Ken May of Antioch Christian Church will be officiating.

In lieu of flowers, family has requested that donation be made to K9sforWarriors in the name of Jon Dervic. https://k9sforwarriors.org

To order memorial trees or send flowers to the family in memory of Jonathan George Dervic, please visit our flower store.