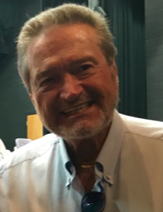 Jim was born to the late Harmon Eugene and Martha Norris and grew up among a large extended family in the small South Georgia town of Fitzgerald. He graduated from Fitzgerald High School in 1959 where he lettered in baseball, a pitcher for the Purple Hurricanes.

He moved to Atlanta right after high school, went to technical school and then met and married the love of his life, Evelyn Callahan, his wife of 56 years. Jim apprenticed in the blueprinting business, but it wasn’t long before his entrepreneurial spirit emerged, and Jim became cofounder, owner, and president of AAA Blueprint, Inc which later became AAA Digital Imaging. Jim and his business partner also founded I&J Investments, along with several other business endeavors. He served on several Boards of related businesses and ended a very successful business career when he retired in 2009, after almost 50 years in the business. His work ethic was exemplary.

Jim was an avid outdoorsman. He loved to fish and hunt. He started early in life with a sling shot, graduated to rifles then to bow hunting which was his passion. He was a member of Traditional Bowhunters of Georgia, a hunting organization open to bowhunters who use traditional archery equipment and was publisher of their magazine. His collection of mounted hunting trophies include those from Africa, Canada, and out west.

Jim had a deep faith and his commitment to His Lord and his church, Eastside Baptist, was evidenced in the many ways that he served both. He was faithful in his attendance and his participation at Eastside Baptist Church where he served as a Deacon. Jim’s spiritual gifts were giving, edifying, compassion and mercy. He was extremely generous to his church, his family, and countless others. He was active in Sunday school, men’s discipleship, prayer and Bible Study ministries. He even at one time served in the Children’s department. In addition to that he was a Gideon, served in the Prison Ministry at Cherokee County Jail, and attended a local community prayer breakfast at Hickory Flat Family Traditions as long as he was able. His service was heartfelt for he was deeply committed to his Lord and Savior, Jesus Christ.

Jim was blessed with a large and loving family. He and Evelyn were parents to four children: Michael James (Mike) Norris, Leza Norris, Lorie Norris Wolfe (Jonathan), and Jan Norris Baker. They were blessed with ten wonderful grandchildren: Ayla, Shelby, and Danielle Norris; Bailey and Jordan English; Caroline, Colyer, and Jack Henry Wolfe; Alyssa and Hunter Baker. He is also survived by a sister, Tonnie Norris Carter, and a brother Don Norris.

Services for Jim will be at Eastside Baptist Church on Monday, February 5, 2018. Visitation and viewing will be at 10:00 a.m. and service at 11:00 a.m. Eastside Baptist Church is located at 2450 Lower Roswell Rd. Marietta Ga. 30068 . Interment will be at 3:00pm in Macedonia Memorial Park at Canton Funeral Home and Cemetery, located 10655 E Cherokee Dr. Canton, GA 30115. Canton Funeral Home at Macedonia Memorial Park is in charge of Services.

In lieu of flowers, family requests that memorials be made to Eastside Baptist Mission Ministry.

To order memorial trees or send flowers to the family in memory of James Norris, please visit our flower store.